We are a research team at Trent University working on a CIHR-funded project entitled 'Perceptions and Realities of Mild Cognitive Impairment (MCI): Diagnosis and Treatment for Older Individuals.' The team consists of sociologists Stephen Katz and Peri Ballantyne and psychologist Kevin Peters. The project is funded for three years 2011-2014 and our research goal is an interdisciplinary and qualitative examination of the scientific, pharmaceutical, technological and cultural aspects of cognitive impairment in relation to memory and aging. 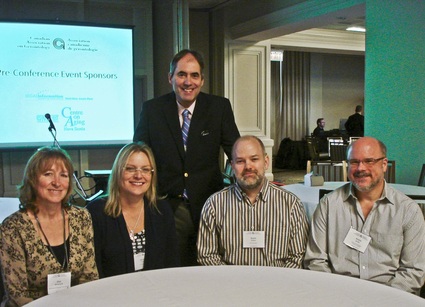 Canadian Association on Gerontology conference, Halifax, Oct 17-19 2013
What is the focus of the research?

The focus is on Mild Cognitive Impairment (MCI) and questions regarding its nosology, risk factors, validity (for dementia) and treatment. The development of the concept of MCI, emerging in the 1960s but specifically defined during the past decade, is important to understand because, while individuals with MCI typically have some degree of cognitive impairment, the severity of this impairment falls short of meeting formal diagnostic criteria for dementia. Thus MCI has generally been considered a transitory stage between normal and pathological cognitive aging (e.g., Alzheimer disease).

Why are we studying MCI?
We think that the status of MCI and the reliability, validity and implications of MCI criteria warrant further investigation.MCI is also interesting because it articulates geriatric care with neuroscientific and pharmacological advances, cultural anxieties about cognitive deficits and ethical controversies about cognitive enhancement. Hence MCI is an ideal opportunity to explore the wider social patterns and cognitive culture that connect aging and memory, the social determinants of health and the biopolitics of dementia.